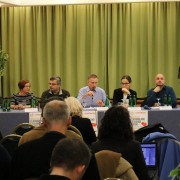 Hungarian journalists shared their experiences of limits to their freedom of expression in recent months, including the closing of an independent newspaper Népszabadság and participants heard more detailed accounts of the government raids on foundations benefiting from foreign funding. As with earlier interventions from across Europe, the point that once the questioning of the importance of civil society is accepted by the public, it is very difficult to recover, was made. In the second half of the panel, attention was turned to Poland and Croatia, where similar trends can be observed.

Short summary of this inspiring talk:

More Democracy for More Europe is a program with the aim of mapping the “Shrinking Space through illiberal democracy governance” and to find ways to people and help each other in not letting it happen.

Exactly one month after the closing of Népszabadság, on the day of the US presidential election and the same day the Hungarian government seventh – this time failed – attempt of changing the fundamental law, there was a conference on civil society: how do governments act, what can the independent media, and what the non-governmental sector do to stop such shrinking.

The director of CONCORD, Seamus Jefferson, who moderated the discussion, highlighted that the priority of the two-day program is gathering information, exchanging experiences and opportunities and discussing good practices. “Most of us are involved in international development. Our Job is to represent the democratic and European values in countries remote from us. In order to credibly represent this, we must first restore order around our own houses” – he said in the summary.

András Dési, Senior Editor & Reporter with Hungary’s leading political newspaper NÉPSZABADSÁG for more than 26 years had an emotional but factual recollection of the events of the past few months, and the surprise suspension of the newspaper.

Tamás Bodoky, an investigative journalist and editor of átlátszó.hu expressed his opinion that one of the root causes of the problem is the ownership of the media. “In Hungary the media is the toy of the rich, in most of the cases the wall between the editorial and the ownership is absent and they use the paper or the television to broadcast their own views.” “Politics uses the media directly and indirectly through economic means. By influencing the market it diverted investigative journalism, so reducing readers’ access to reality.

Veronika Móra, director of Ökotárs called alarming the fact that two processes started as a result of the government control of the Norwegian Funds. One is that the credibility of NGOs decreased in the eyes of the incompetent, second is that there are still civilians under the pressure of the government and the propaganda. On the other hand, as a somewhat hopeful occurrence, certain civil society actors started to see the need and possibility of co-operation.”

“Hungarian democracy started as a peaceful process back then, with no fights – so we cannot really see the value of its results and its institutions. We did not have to fight for their survival. We have to start building civil society from the scratch, from grass-root service providing, in small steps, with lots of patience.”

According to Małgorzata Szuleka, a lawyer and researcher at the Helsinki Foundation for Human Rights, also the activist of Black Monday in Poland, the attempts of the Hungarians are exemplary in Poland, especially that the exchange of experiences between the right-wing politicians exist as well. In Poland, the government propaganda singled out the Constitutional Court for the role of the “main enemy”. She admitted that in addition to the public media, in the private sector a more or less independent media can operate, and it has effect and is accepted by the people. However attacks appeared in social media sites. People call themselves conservatives began to denounce the operation of NGOs on Twitter. “Good, easy to understand narrative would be essential towards youth and the less educated people, because this is how the populist governments win so much support.”

Gordan Bosanac, Chief Analyst at the Centre for Peace Studies in Zagreb, Croatia and coordinator of Human Security programme, leader of CROSOL pointed out how surprising it was amongst the new European countries that the direction of political discourse opposes the common European values. He sees Croatia lucky not to have a government winning with overwhelming majority, as both the hungarian and polish examples show fast decline of such values, as right wing parties started demolishing the pillars of democracy right after getting into power.  “The operation of illiberal politics: find or create an enemy, feared by most people and offer protection against it by any means, even the most violent ones”. According to Mr Bosanac, the solution is in international cooperation and actions among civil society organizations.